As of April 15, 2013 The Roadkill Du Jour Kickstarter Campaign was fully funded and items are en route to print. This is a testament that the combination of Kevin LaPorte, Laura Guzzo, and Shawn Harbin can create something that people want to be a part of and experience. We would like to thank all that contributed and helped along the way. Some contributed their dollars, while others contributed promotional venues and media. It is a testament to our society, and to our fellow man on helping one another. Do not let it be thought of as a handout, but rather the help up as we are giving back to that community the best that we have to offer. There is a firm belief that things happen certain ways, and that another time, another aspect, a different ingredient would have resulted in something much different. While I cannot see this product being executed any better than it has become, it was created with the 100% complete passion of the people involved. In regards to that, we can only hope the readers feel the same. We thank you from the deepest regions of our hearts and to show out thanks we give to you Roadkill Du Jour. 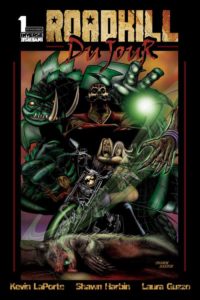